This morning we went into town to pick up our new laying fowls. They are only 1 day old so this is a case of the chicken  coming before the egg, about 6 months before in fact. So  much Delayed Gratification because a lot  expensive food and 22 weeks goes by till a chick is at  ” point of lay”(POL) . Chicks need to be kept warm. They are very contented at 37 degrees celcius , but will cheep loudly to alert their carer that they have been left out in the cold.

Organic standards demand that organic meat and egg chooks are fed and managed organically from day one, because  chicks are  fed antibiotics from day 1 or 2, so we may not buy in “started pullets”, which would be heaps easier. Started pullets are 6 week old, fully feathered and able to retain their own body heat . At this point they can leave their mother ( who by now is over it and will happily go back to the hen house and begin laying eggs again), or leave the artificial brooder house. The antibiotic Coccidiostat medication is added to standard chicken crumbles, so of course we have to make our own . We grind biodynamic grain , barley this time,  fresh daily for our little girls, and add raw milk . This is in fact a great diet , balanced and high protein. The raw milk prevents coccidiosis, a bad bacterial infection of  the digestive tract which gives chickens diarrhea which they often do not survive.  I added kombuture , kelp and minerals  to their first meals today to get them off to a great start.  Sadly 20 chicks were dead on arrival, I don’t know why, it is very unusual to have more than a few per hundred DOA.

Sometimes you can revive a languishing chick by holding them under your tee shirt for a few hours.

But the remainder are vigorous, they already know my voice, and have been eating very well!  They have also been  drinking plenty of pure water . The cheeping emanating  from my bedroom only happens for one day a year ( thank heavens!) , as at dusk we insert 20 or so chicks under each of  several  clucky chooks. I only want to be their mother for one day, its pretty messy and full on, so I will hand over the job of protecting and teaching these chicky babes ASAP  to some good ol hens who have been sitting patiently on a few eggs each . After dark we will carefully remove an egg from under the fowl (who will no doubt peck us vigorously for this), and insert a chick . Soon all chickadees are safely under a warm fluffy mother.  Mum will believe ( maybe) that the eggs hatched prematurely and in the morning will be really proud of her large family, and clucking away to them, keeping them, all in order.

.If the ruse fails, the chook is actually good at maths  and figures these are imposters , she may peck them. So yes it is a delicate operation and slow and calm movements are essential to not ruffle any feathers too much  it, but mostly   it is up to how motherly the individual is.  You only get one chance at this….it is rare for a hen to accept 2 day old chicks. If the bond fails to develop by morning, we must quickly rescue  the rejected orphans, gather them up and place them  in the good ol rammed earth solar passive designed chicken brooder with lamp.  Then not only  will we be raking out poo and replacing fresh sawdust bedding weekly, we’ll be on constant vigil for the next 6 weeks against dry water bowls, goannas, rats, snakes, hawks,crows,  kookaburras, fleas , cold winds,  heat stroke or drowning.   So we dearly hope the 4 clucky chooks we have out there take to the chicks tonight. A maximum of 25 chicks per hen is advisable. The broody hen should have her own space because older chooks may have diseases, or at least keep eating the special chick food and drinking out of the special chicken drinkers, which you then need to refill much more often.

Update: We had 2 chooks keen to take on any chick we stuck under them and 2 that were not going to take any, they just moved away .So being a very warm time of year we took full advantage of motherly instinct and crammed 35 under each co operative  mumma fowl! We considered placing the rest under a clucky duck but having never tried this…..ducks don’t sleep at night like chooks, they are very alert in the dark, I predicted pandemonium: after much loud quacking from a retreating duck we would have been looking with a torch under bushes for hours trying to find the rejected chicks. So why didn’t we just put them in the rammed earth chick house? Well,  I heard some rats out there . I once had 50 day old chicks killed by rats on their first night under a lamp out in a shed. Horrible!  I remember a time when there were hardly any rats, but they are now plaguing everyone I talk to, now why is that?
We will have to  rig up a covered outdoor  pen for these chicks and bring them back inside each night. 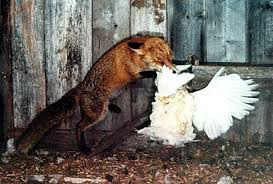 As you can imagine, a started pullet is an expensive bird, and we don’t want to sell many. We will prepare a pullet paddock now  to grow beetles , slaters, sunflowers , alfalfa, kale  and other  greens for their consumption in their “teenage” phase before they join the layer sheds at 5 months old.
Having got your birds to POL, imagine the  anguish , never to mention financial loss,  of losing  your  entire flock of new hens to a fox in one night. Oh yes, it has happened to me when I was 23, I still remember the pain of the day time fox incident in Neerim South Victoria. Always lock up your fowls at night because foxes will not attack very often, but when they do, there are few survivors. Foxy certainly enjoyed my tender  young birds….but  left quite a few of old tough ones  .
Foxes can jump onto tall fence posts, are extremely stealthy, will dig their way in and will often kill far more than they eat. The technique I witnessed of a day time fox was to run around  and around in circles amongst the panicked fowls, snapping their jaws wildly. In this manner they manage to kill or horribly injure heaps of chooks before they can get away. We hope beautiful Alby our Maremma dog will be onto any fox approaching our henhouses.

We also keep 2 alpacas to deter foxes but apparently the females are not as effective as a whether or Macho (entire male alpaca) . So after many trials your chicks turn into chooks and start laying pullet eggs. Hooray!!
So  you now have more of an idea of what it takes to bring you your next dozen  beautiful golden eggs from Merri Bee Organic farm.